With the Blue Line light rail extension opening this week, the length of light rail in Charlotte will be doubled, making it easier to get to South End from all points north. Whether it’s your first trip to the neighborhood or you’re a regular, be sure to check out the local businesses you can easily get to from the light rail. 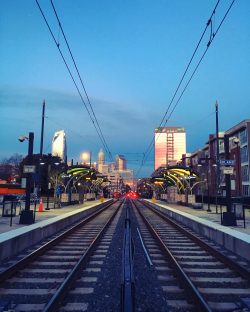 Here’s a station-by-station guide to get you started:

Midnight Diner, 115 E. Carson Boulevard: Contrary to its name, this South End spot is delicious any time of the day. Plan a stop at the old-school diner for favorites like shrimp and grits and chicken and waffles. You’ll likely see a line out the door but it moves quickly thanks to the diner’s speedy service.

Craft Growler Shop and Tasting Room, 1320 S. Church Street: Craft is part bottle shop, part taproom and part restaurant, meaning they have something for everybody. Be sure to check out their patio, where a projector shows big sports games and movies, and grab some free boiled peanuts.

Seoul Food Meat Co., 1400 S. Church Street: This non-traditional Korean restaurant serves up family-style food and appetizers that will change the way you think about BBQ. After you enjoy an order of Soy Garlic Wings, check out the back patio with yard games and a full bar serving local craft beers and flavored beers that mix fruit juices and Sapporo.

Giant Seesaw: When you walk off of the train at the Bland Station, you’ll notice a big yellow bar on one side of the station. It looks like it might be public art, and it is, but first and foremost it’s a giant seesaw. You read that right, a giant seesaw. Hop on to relive your favorite days on the playground.

First Friday Gallery Crawl: The first Friday of each month, South End galleries and art destinations stay open late for a free gallery crawl. The Bland Station is at the center of it all, making it the perfect spot to start your art adventure.

Hot Taco/All American Pub/Oak Room/Slate, 200 E. Bland Street: Can’t decide between tacos, a sports bar or playing games? South End’s got you covered. These four restaurants and bars offer up a variety of options and are a go-to for Panthers tailgates.

Price’s Chicken Coop, 1614 Camden Road: This South End institution has been serving up Southern fare since 1962. In a neighborhood that’s constantly changing, Price’s has stayed the same over the years, sticking to its cash-only and no cell phones policies.

Atherton Mill and Market, 2120 South Boulevard: This renovated mill building has some of your favorite national apparel shops (Free People, Anthroplogie, and Warby Parker, anyone?) alongside local businesses like wine shop Vin Master, raw vegan restaurant Luna’s Living Kitchen and Not Just Coffee. Stop by on Saturday mornings for your foodie fix: local produce from the Atherton Farmer’s Market and spices from Savory Spice.

Shops at Camden Road: Down the street from Atherton Mill, find more local shopping including tees to show your CLT pride at 704 Shop, fine denim at Blue Hem, the perfect running shoe at Ultra Running Company, and everything pink at Girl Tribe Co. Next door to shopping, you can grab a Carolina beer at Pop the Top, eat meatballs out of a cone at Fidelli Kitchen, or try Korean beef barbecue at Bulgogi Box.

Sycamore Brewing, 2161 Hawkins Street: Sycamore, one of South End’s six breweries, is known for its festivals and weekly Food Truck Friday with live music, food trucks, and, of course, craft beer. Not a fan of beer? Try a prosecco pop with the bubbly and King of Pops popsicle of your choice. 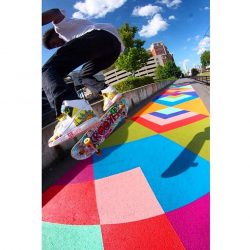 Magic Carpet Murals: You’ve seen then on Insta, now it’s time to step on them yourself. The Magic Carpet Murals are three murals painted on the Charlotte Rail Trail, two of which are in South End. The brightly colored paintings can be found behind Shook Kelly at 2151 Hawkins and further down the Rail Trail near New Bern Station.

Monsoon Thai, 2801 South Boulevard: Monsoon Thai serves up delicious, authentic Thai food that fits within a budget. Go for lunch to get a drink, soup, an eggroll and an entree for less than $10. 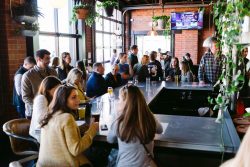 you’ve seen in photos, and when you step inside you’ll understand why. The coffee shop/restaurant/brewery has a patio that backs up directly to the Rail Trail, making it incredibly easy to access from the light rail or the nearby Charlotte B-cycle station. Hanging plants fill the air and 50 varieties of beer beckon from the beautiful shining taps behind the bar.

Triple C Brewing, 2900 Griffith Street: As one of South End’s first breweries, Triple C has built up a dedicated fan base with their popular Babymaker IPA and Golden Boy. The laid-back spot has a patio and hosts a free run club on the Rail Trail every Thursday evening.

Mac’s Speed Shop, 2511 South Boulevard: Get your BBQ fix at one of Charlotte’s best-known restaurants. When the weather’s right, look forward to an open-air patio and fire pits while you munch on pulled pork and mac ’n cheese.

The Music Yard, 2433 South Boulevard: Charlotte’s newest outdoor music venue is opening at the end of March. The Music Yard is located between Mac’s and Southbound, and is kicking off the outdoor concert season with a series of free concerts every Saturday in April and May.